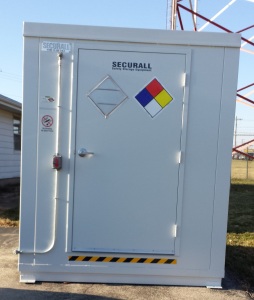 Five massive, metal containers are being placed around the state to help authorities safely clean up meth lab sites. The containers, which have an exhaust system, will be located in areas near Montrose, Clinton, Cedar Rapids, Des Moines and Council Bluffs.

Iowa Division of Narcotics Enforcement Special Agent in Charge Dan Stepleton will manage the three eastern Iowa containers, which are all being provided by the federal government. He says the Drug Enforcement Administration (DEA) is also paying for small trailers at each site which will be used to haul the hazard materials from the meth lab site to the container. “Then, when the container’s full, we’ll call the DEA and they’ll have someone come and empty the container. The whole bill is paid for by DEA,” Stepleton said.

Law enforcement officers in Iowa discover up to 300 meth labs a year with each one costing around $5,000 to clean up. The five containers are being placed in areas where authorities respond to the highest number of meth labs. Officials hope to install more containers around the state in the future.