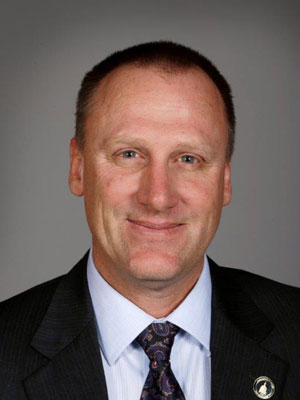 GOP delegates at a special nominating convention held in Clarinda last night picked a state representative to run for Joni Ernst’s seat in the Iowa Senate.

Ernst, who will become a United States Senator next month, resigned from the state senate at the end of November. Sixty-seven Republican delegates in her district convened at seven p.m. yesterday to hear from the seven candidates who were vying to run for the state senate. After four rounds of voting, State Representative Mark Costello of Imogene was declared the winner, with 56 percent of the vote. Costello, who is a farmer, was elected to the Iowa House in 2012 and he won reelection in November.

The senate district covers six southwest Iowa counties — Fremont, Mills, Montgomery, Page, Ringgold and Taylor — and is the second-most Republican in the senate.

Democrats in the district will hold their nominating convention Saturday at Clarinda’s Public Library.

Voters in the district will choose their new senator on Tuesday, December 30.

If Costello wins, his House seat will be vacant. That means a special election will be held sometime in late January or early February in his district which covers the two counties of Fremont and Mills and most of Montgomery County.