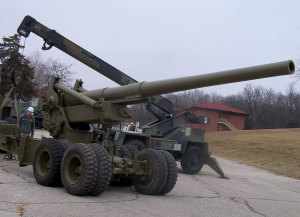 This gun is the latest addition to the Iowa Goldstar Military Museum.

The Iowa Goldstar Military Museum at Camp Dodge has added another piece of military history to its collection. Museum curator Mike Vogt watched as crews moved in a restored 15-ton howitzer that was referred to as a “Long Tom.”

“It fired a 105 millimeter shell, and this particular weapon could hurl a 96-and-half-pound shell 15 miles. It had a firing rate of 40 rounds per minute, and within an hours’ time they could deliver 3,700 pounds of steel and high explosives on a target,” Vogt says.

Vogt says the artillery piece had a crew of 12. “It was one of the larger pieces that we deployed to the Pacific, to the Mediterranean theater, North Africa and to Europe during World War Two,” according to Vogt.

The gun was a key weapon in support of the ground troops. “That weapon had phenomenal accuracy,” Vogt says, “with someone in an airplane directing the fire with a forward observer looking through binoculars, once they nailed in the range, they put rounds right in the middle of roads, they could hit pill boxes, gun emplacements.” 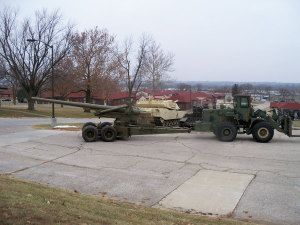 Crews pull the gun into place.

The gun that was pulled into place in the displays outside the museum Friday was manufactured in 1944. He says it came to us from the U.S. Infantry Museum at Fort Benning, Georgia and was brought to Iowa last November. Soldiers in the maintenance shop worked on the gun to refurbished and repaint it.

The museum has around two dozen former military vehicles, planes and weapons on display outside the museum, and he says they felt it was important to add this one to the collection.

“It’s a piece of equipment that we didn’t have. It’s a gun that most certainly Iowans during their time in the U.S. Army during World War Two would have appreciated the support of or served in a crew with that particular weapon,” Vogt says. “It’s just kind of an interesting piece, I don’t know how many of them have survived the years. They served on in Korea and kind of modified versions in the Vietnam War.”

The displays inside and outside the museum are meant to honor those who served in the military and preserve Iowa’s military history. 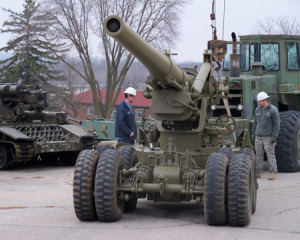 Vogt encourages anyone who is interested to come out and see the gun. “It’s interesting for visitors to come out, we see cannons and tanks on TV, but especially when young people come out here and see the size of these pieces, they are always amazed by how large they are and how much they weigh, and what they actually look like and feel like close up when you can come out here and feel them and put your hands on them,” according to Vogt.

The Long Tom is outside and can be viewed at any time. The exhibits inside the Iowa Goldstar Military Museum can be viewed during regular museum hours and admission is free. Museum hours are 8:30 A.M. to 4:30 P.M. Monday through Friday, and Saturday 10 A.M. to 4 P.M. Photo identification is required for adults to enter Camp Dodge.

For more information visit the museum website at: www.iowanationalguard.com/History/Museum