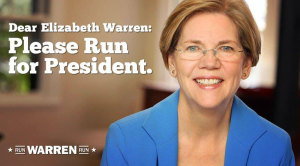 A gathering is planned tonight in Des Moines by a group that’s urging Massachusetts Senator Elizabeth Warren to run for president. Victoria Kaplan is with MoveOn.org, the group making plans to open offices in Iowa and hire staff here for its “Draft Wareen” movement.

“To demonstrate to Elizabeth Warren that she has the support here to run for president and win,” Kaplan says.

Warren has repeatedly said: “I am not running for president,” and some Democrats view the MoveOn campaign as wasted effort. Kaplan, though, is among those who view Warren’s statement as a commentary about the present, leaving the door open to a run in the future. Kaplan also cites the successful “draft” movement that encouraged Warren to run for the U.S. Senate in 2012.

“I think we’re seeing an even bigger moment right now where her brand of leadership, her history of fighting for working families, of standing up to Wall Street — this really is Elizabeth Warren’s moment,” Kaplan says.

MoveOn.org has been aggressively reaching out to Democratic activists in Iowa to invite them to this evening’s event which will be held in a downtown Des Moines coffeehouse, a relatively small venue for a rally. If this “draft” movement is unsuccessful and Warren still remains on the sidelines in 2016, Kaplan is reluctant to say whether progressives in the party will support Hillary Clinton instead.

“One of the beautiful things about inspirational figures in this country is that they really do inspire people to advocate and participate in our democracy and that the energy that we’re seeeing to call on Elizabeth Warren to run for president I think will translate into a more engaged and energized base that will do great things for the state of Iowa and for the country,” Kaplan says.

Warren campaigned with U.S. Senate candidate Bruce Braley in Iowa City and Des Moines in the run up to the November election. She was a leading critic of the spending deal that passed congress last week for a provision that rolls back some of the banking reforms enacted after the meltdown of U.S. financial markets in 2008.