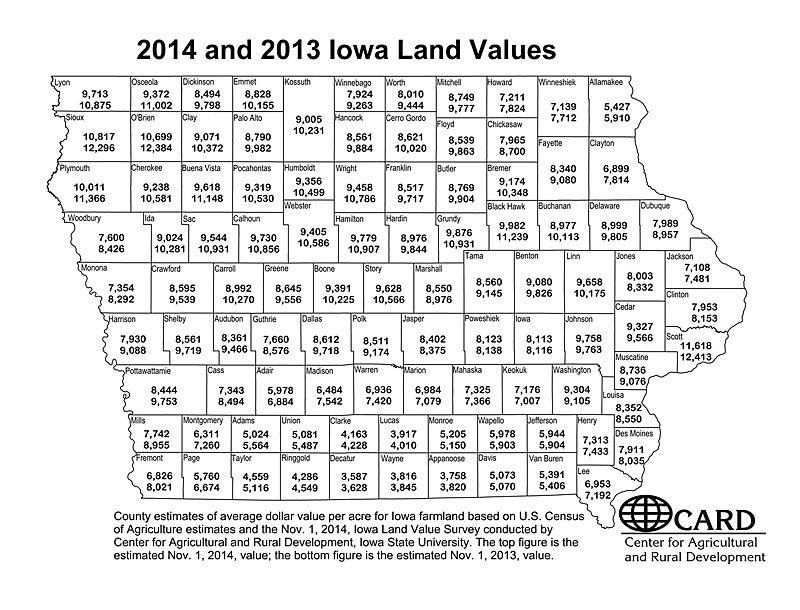 Iowa farmland values saw their biggest drop in almost three decades in the latest survey released by Iowa State University today. The Center for Agricultural and Rural Development is taking over the survey duties from retired economics professor Mike Duffy. But Duffy helped crunch the numbers this year. 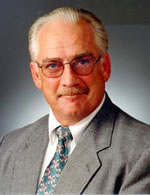 “What we saw was an 8.9 percent drop,” Duffy says. “When you look, the primary reasons the survey respondents gave for the drop were lower commodity prices.” The drop means an average value of acre of farmland in the state fell $779 to $7,943 dollars. Duffy says it’s not surprising the value would drop given the drop in commodity prices and the impact seen in other areas of the economy.

“You know if you use just the basic formula — land values to income divided by the interest rate — right now when the income drops, then we would expect to see the land values drop. And in fact, I think it’s probably a sign that the market is working when we do see responses like this,” Duffy says. It is only the second year since 1999 that the survey has shown a decline in farmland values.

The drop has some people asking if land prices will continue on the way down after hitting a peak in 2013, just like they peaked and dropped in the 1980’s. Duffy doesn’t see that comparison.

“My personal feeling is that we went into the fall that we did in the early 80’s because we went on a speculative bubble,” Duffy says. “The increase that we’ve just experienced until this year, I think has been more income driven.”

Even with the decrease, he says farmland values are more than double what they were 10 years ago, 81 percent higher than 2009 values, and 18 percent higher than 2011 values. “Even though it’s not good news that it dropped, it is a response to the market. And my personal feeling is that it doesn’t say that we are going to see major drops now for the next several years,” according to Duffy. He believes the values have settled in to adjust to the economic situation. “My guess, if we see corn end up in the $3.50 to $4.00 and beans in the $10 range, which is kind of what it looks like now, we good expect to see these land values stabilizing, maybe a little more down, but stabilizing and kind of holding in there,” Duffy says.

For the second year in a row, Scott County in eastern Iowa had the highest land values and Decatur County in south-central Iowa reported the lowest farmland values. Decatur County reported a value per acre of $3,587 or a drop of $41 an acre from last year’s report. While Scott County reported a value of $11,618 or a decline of about $795 dollars and acre, which was about $22 dollars more per acre than the statewide average decline.

Southeast Iowa was the only crop reporting district in the state to show an overall increase in values. “We had seven counties down in that area that reported an increase in value,” Duffy says. “Southeast had drought a couple of years ago, so they had not been increasing — think that is part of the reason. I think that they had record corn yields.” He also says increased livestock values caused more of a demand for pasture land in the southeast. Southeast Iowa reported land values were 3.2 percent higher than last year. Keokuk County, located in that southeastern portion of the state, reported the largest percentage increase for any single county at 2.4 percent. To find out more, go to CARD’s website.