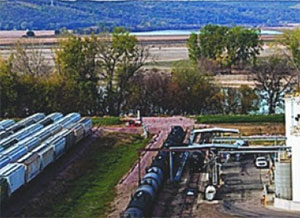 AGP plans to add a vegetable oil refinery to its operations in Sergeant Bluff.

A company in Sergeant Bluff has won state and local support for a $90-million vegetable oil refinery project. The Iowa Economic Development Authority approved $152,00 in direct assistance along with tax credits to the Ag Processing Incorporated project. The Woodbury County Board of Supervisors has approved a seven-year tax abatement for the refinery.

The chair of the supervisors George Boykin says the AGP expansion will provide a number of benefits to the county. He says they are adding 20 new jobs and probably some ancillary jobs for the plant and that doesn’t include the jobs created during construction. AGP will build the vegetable oil refinery next to their existing soybean processing and biodiesel plants.

Company vice president Cal Meyer says Sergeant Bluff was the best location for the facility. “With the commitment that we have in biofuels with the biodiesel facility located at Sergeant Bluff, that was one of the determining factors that we had. And then secondly, the area here with soybeans, it’s a very area to draw soybeans, very good quality beans in the area,” Meyer says.

Supervisor Mark Monson says the company has already invested a lot into the facilities. “And with this project, we’re going to keep that product here and do one more thing to it before it goes away, and that’s important,” Monson says. “Plus, this is a cooperative, so there’s 250-thousand farmers involved in it and our local farmers are going to benefit. That’s a big deal.”

A new water cooling tower is part of the project and a new tank farm will also be built for the finished salad oil. Construction will start in June with completion slated for the spring of 2017.