You are here: Home / News / One theater shows ‘The Interview’ in Iowa 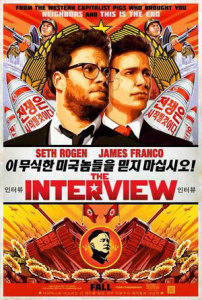 The Galaxy 16 Cine in Cedar Rapids was the only Iowa movie theater to show the controversial film “The Interview” on Christmas Day. The movie — about a plot to kill North Korean dictator Kim Jong Un — was initially pulled when the distributor of the comedy, Sony Pictures, was targeted by hackers who claimed terrorist acts would take place against theaters showing the movie.

Gina Durgin of Anamosa was waiting in line at Galaxy 16 and told KCRG-TV she wanted to be among the first to see The Interview on the big screen. “I was really excited when I heard it was going to be showing and I just enjoyed the commercials. It looks like it’s going to be really funny and the hype doesn’t matter that much to me, besides the fact that we almost didn’t get tickets,” Durgin said.

There were two showings of The Interview last night in Cedar Rapids and both were sold out. Chris DeBack of Vinton told KCRG he was interested in the movie long before the hacking scandal.

“I’m a huge Seth Rogan fan and Judd Apatow has some very funny movies…with Sony kind of pulling the movie, it made me a little bit more interested,” DeBack said. Sony had originally planned to debut The Interview in roughly 3,000 theaters on Christmas Day, but canceled the release citing security concerns. The company backtracked and released the movie in 300 theaters, including the one in Cedar Rapids.