You are here: Home / News / Cold snap to drop highs into the single digits 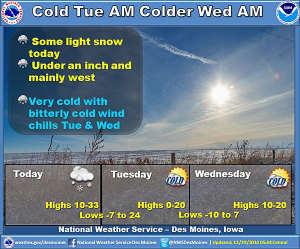 Some frigid temperatures are moving into Iowa for the final few days of the year. National Weather Service meteorologist Aubry Wilkens says lows overnight tonight will range from the single-digits-below-zero in northern Iowa to near ten-above-zero across the south.

“The big concern with this system is going to be the wind chill values,” Wilkens said. “As winds will stay up quite a bit, we could see wind chill values in the neighborhood of 20-to-25-below zero in the north and right around zero in the south.” Old Man Winter could tighten his grip on Iowa even more tomorrow.

“The cold temperatures will persist into Tuesday with highs in the single digits in the north and teens in the south and Tuesday night could be even colder (than tonight),” Wilkens said.

A slight warm up — very slight — will come later this week. “The good news is temperatures will return to near normal towards the end of the week, however, near normal for this time of year is right around freezing,” Wilkens said. “It doesn’t look like we’ll be above freezing too much and then another cold push comes in after the weekend into early next week.”

The cold snap extends across much of the West and Midwest. In Denver, Colorado, high temperatures on Tuesday are expected to drop up to 40 degrees below normal for this time of year.