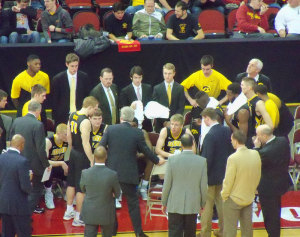 The Iowa bench in a timeout during the Big 4 Classic.

The Iowa Hawkeyes open the Big Ten race on Tuesday with a visit to nationally ranked Ohio State. The Hawkeyes take a 9-4 record into the start of the league race.

Cold shooting plagued the Hawkeyes during non-conference play. They are shooting only 41 percent from the floor and just 31 percent from 3-point range. Both rank near the bottom of the Big Ten. McCaffery says they have to be more consistent as every team in the Big 10 has a good record and good players and he says particularly this year you can’t look at teams and say they are bad and you are going to beat them.

Iowa picked up a rare win in Columbus a year ago with an 84-74 victory. “It’s a great atmosphere and we played with a great deal of poise to win that game,” McCaffery says. He says they should know what they have to do to win there.

Ohio State is 11-2 with the losses coming to Louisville and North Carolina. Freshman D’Angelo Russell leads the Buckeyes at nearly 18 points per game and teams with senior Shannon Scott to form a solid backcourt.

It will be an early noon, Iowa time, tipoff in Columbus.