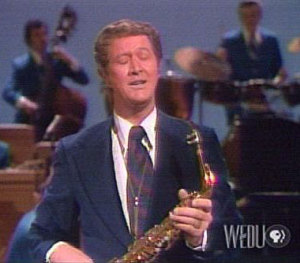 An Iowan who gained fame on the Lawrence Welk Show has died. Richard “Dick” Dale graduated from Algona High School in 1943 and served in the Navy during World War II. The singer and saxophone player joined the Lawrence Welk Orchestra when he was 24.

In a video tribute to Welk from 1987, Dale recalled his big break. “I got a call one Sunday afternoon…and he says, ‘hello, this is Lawrence Welk,’ so I went into Chicago and tried out for the band,” Dale said. “I was accepted and joined the band in Clinton, Iowa on February 9, 1951.” Dale was a featured performer on the Lawrence Welk Show until the TV program ended in 1982. Dale his wife Marguerite were married for 65 years and they had four children.

After living in the state of Nevada for several years, the Dales moved back to Algona in 2006. Dale died on Friday in Algona. He was 88.