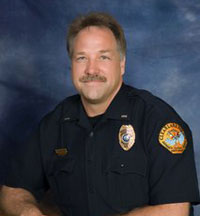 Clear Lake’s Police Chief was laid to rest today. Hundreds turned out for the funeral of interim police chief Rex McChesney who died Friday of pancreatic cancer. The city council and mayor honored the 52-year-old McChesney during a special meeting Monday.

Mayor Nelson Crabb read from the proclamation approved by the council, saying that McChesney tried to be fair to everyone he encountered. “Whereas Rex McChesney’s service to the City of Clear Lake, Iowa, and its people regardless of stature in life, economic status, religion, or race has inspired other law enforcement officers to follow his example; and whereas, Rex McChesney will be deeply missed, but leaves and enduring legacy of public service and perseverance that inspire all,” Crabb says.

McChesney was a Clear Lake native who started his law enforcement career in 1983 serving as a correctional officer at the Cerro Gordo County Sheriff’s Department. He was hired by the Clear Lake Police Department in 1986, and was sworn in as the interim police chief in March. He was diagnosed with cancer this spring.

Councilman Mike Callanan had McChesney as a student in school and says he was the right fit as a police officer in Clear Lake. “Chief McChesney was the consummate small town police officer as he was able to combine a great level of professionalism with an outgoing and friendly approach, exhibiting care and concern for the well-being of his community while holding himself to a very high standard for the respect of his position,” according to Callahan Callanan praised McChesney’s professionalism to his job.

“In an era where law enforcement is sometimes under attack, Rex always carried himself above reproach in both his professional and personal life,” Callahan says. ” God bless you Rex for a life well-lived and law enforcement done right. You will be missed.”

McChesney’s funeral was this morning at St. Patrick’s Catholic Church in Clear Lake. McChesney is survived by his wife and two sons.