You are here: Home / News / UNI band to march in the New Year in London parade 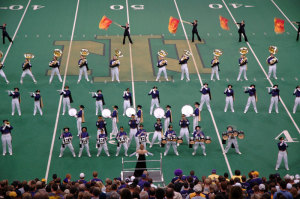 A marching band from Iowa will be among the participants in the London New Year’s Day Parade. The University of Northern Iowa Marching Band is overseas getting set for Thursday’s march from Piccadilly to Parliament.

UNI sophomore Ethan Seidenkranz spoke with KCRG-TV on the Cedar Falls campus as he and other band members boarded buses for departing flights from Chicago and Minneapolis.

“This is my first time out of the country, so I’m just excited to go see what it’s like outside of the states,” Seidenkranz said. The band and color guard members like Amanda Worsfold have been practicing for months for the New Year’s Day bash. “So much practice, tons of practice indoors, outdoors, so many nights preparing for this,” Worsfold said.

The group from UNI will stay seven days in London for sightseeing and tourist stops. They’ll be among 8,000 participants in the parade, with more than a million people watching on the streets of London. UNI senior Nick Carlo is keeping his nerves in check. “I’ve been really relaxed about it,” Carlo said. “They’ve prepared us really well for this trip, telling us what’s all going to happen, itinerary, things we should be looking out for, stuff like that.”

Freshman Dan Benson is excited about getting the opportunity this early in his college career. “I didn’t expect to go to college and go to London right away. I thought maybe there’d be some chances to go overseas, but really it surprised me that I was presented with this opportunity,” Benson said. There will be a livestream of the parade shown on the London New Year’s Day Parade website starting Thursday at 6 a.m. Iowa time.