You are here: Home / Fires/Accidents/Disasters / Preliminary report: 55 tornadoes in Iowa in 2014 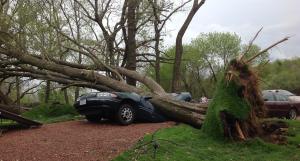 More tornadoes touched down in Iowa in 2014 than the previous two years combined. Aubry Wilkens is a meteorologist with the National Weather Service in Johnston which released a report on Iowa’s tornado activity this week.

More than half of the tornadoes in Iowa in 2014 were short-lived and relatively weak EF0s. There were three EF2 tornadoes.

The busiest day for tornado activity last year came on June 16, when 12 twisters skipped across northern Iowa. That fell well short of the record for a single day. “The most tornadoes we’ve seen in one day in the state was 28 on April 11, 2001,” Wilkens said.

Tornadoes were blamed for two deaths in Iowa last year. Both occurred on April 27 in Keokuk County.