You are here: Home / Sports / Volunteers run over Hawkeyes in Taxslayer Bowl (audio) 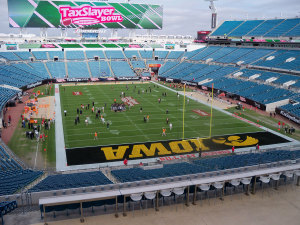 Tennessee scored four times in the first half, three in the first quarter, before Iowa got on the board and the Volunteers went on to an easy 45-28 victory over the Hawkeyes in the Taxslayer Bowl Friday in Jacksonville, Florida.

Hawkeye coach Kirk Ferentz credited Tennessee with coming out strong. “They played an excellent football game, they were ready right from the start, we certainly couldn’t match their tempo in that first half,” Ferentz says. “So give them credit, they played a really good football game, I’d venture to say probably the best they’ve played this year. For us it’s disappointing, a lot of things showed up that cost us today.” 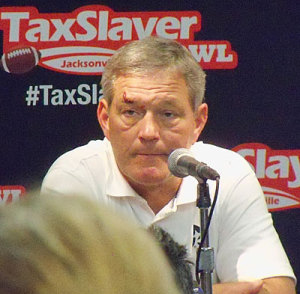 Ferentz says it was a hard way to end the season. “Bottom line is that we had a great group of young guys and 16 seniors that just finished up. So, I feel bad for every guy in the locker room obviously. especially our seniors. Btu that’s part of football, we’ll get up tomorrow and move forward,” Ferentz says.

Running back Mark Weisman scored Iowa’s first points on a touchdown run with 3:43 to play in the second quarter, and added another scoring run in the fourth quarter, but the Hawkeyes never got back in the game.

Senior linebacker Quinton Alston says they had trouble on both sides of the ball. “It was tough to put points up on the board, there were a lot of miscues, just assignment errors and things like that. But credit those guys, they played hard and made it tough on us in that first half especially,” Alston says. He says they were not overwhelmed by Tennessee’s speed. “No, not at all, but those guys were athletic, anybody who has athletes is dangerous. But we were ready to match that. I don’t think that was really a factor.”

Ferentz was asked if he was reading the temperature of the program outside, with people saying he should be fired after the poor season.

“We had a coach to the west of us that’s one a lot of football games that got fired, so if you’re in this profession, that’s part of the deal,” He says. He went on to say, “Really I think what I need to do is take the energy that I can put toward the job and put it toward our improvement, and that’s what I’ve tried to do for 16 years.”

Iowa athletic director Gary Barta was asked after the game if he thinks there will be changes in the program. “Now that the season is finally over, he’ll go through his process of preparing what needs to happen so that we can meet expectations for 2015. We talked after the regular season, and we’ll talk more in earnest as we go from here,” Barta says. He would not say if there will be changes in the coaching staff. “I’m not going to speculate on anything about what we are going to do to prepare for 2015, but we’ll start tomorrow,” Barta says.

Jordan Canzeri was one of the few bright spots for Iowa, rushing for 120 yards. Kevonte Martin-Manley had three catches to became the Hawkeyes career receptions leader.