You are here: Home / News / Huckabee ‘cannot rule out another presidential run’ 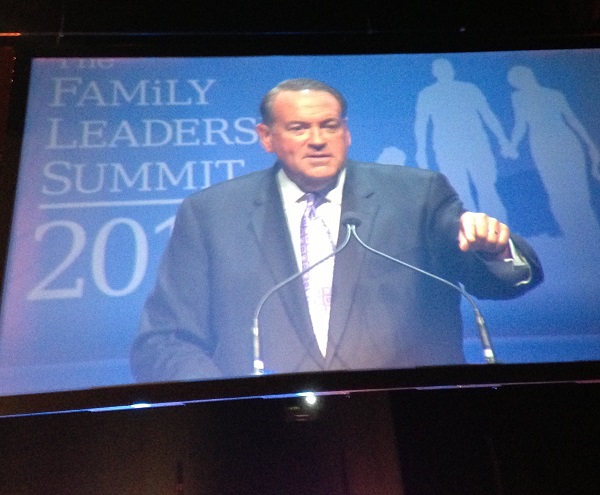 Former Arkansas Governor Mike Huckabee ended the six-and-a-half year run of his weekend show on the FOX News Channel this past Saturday, telling viewers he “cannot rule out another presidential run” and that he felt it was time for him to “engage in the conflicts that have almost destroyed the bedrock foundations of America.” Huckabee made the same case during a speech in Iowa this past April.

“There are some directions we have taken as a nation that make no sense to me based on understanding just a little bit of who we are as a country,” Huckabee said during an Iowa Faith and Freedom Coalition event.

Huckabee has said he needs to know there is a “strong level of financial support” for his candidacy before he’ll run again for president.

“I understand far better than I can even begin to tell you how tough it is to run a campaign on fumes, without fuel,” Huckabee said in 2010 during a news conference in Des Moines. “…When people tell me, ‘Hey, we’re behind you,’ I want to make it clear I don’t want them behind me. I would want them with me. There’s a big difference. People behind you wave at you. People with you write a check.”

Huckabee has been a frequent visitor to Iowa since his Caucus Night victory in 2008. He was among the list of potential candidates who addressed conservative Christian activists at The Family Leadership Summit in Ames this past August. Key advisors were with Huckabee for that trip, including Alice Stewart, his 2008 campaign spokeswoman, and Chip Saltsman, Huckabee’s 2008 campaign manager.

Huckabee is among the list of potential presidential candidates who’re scheduled to speak at a day-long event in Des Moines on January 24.

Huckabee decided not to run for president in 2012, saying that despite all the factors lining up in favor of a run, his heart told him no. He quit his syndicated radio show in December of 2013.