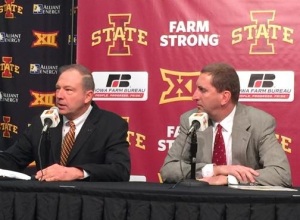 The Iowa Farm Bureau Federation (IFBF) has launched a new partnership with the Iowa State University Athletics Department. IFBF president Craig Hill says the initiative will involve recognition of ISU athletes who excel both on and off the playing field. “It will be a combination of highlighting athletes, but also highlighting farmers and Iowa’s farm families who have those same attributes,” Hill says.

One of the goals of the partnership, according to Hill, is to reconnect consumers with the farm and modern agriculture. “You know, when the Farm Bureau was formed, two-thirds of Iowans lived and worked on farms. Today, fewer than 10-percent of Iowans live and work on farms, so we’re generations removed in many case from the farm and many people have questions and concerns,” Hill says.

One part of the initiative will include a special display inside Hilton Coliseum in Ames and video board graphics and messages that will be shown during Cyclone men’s and women’s basketball games.

The collaboration will also include sales of Cyclone-themed Farm Strong® merchandise to benefit a good cause. “A lot of the compensation from that will go to the Iowa Food Bank Association,” Hill says. “We’re going to donate most of the proceeds to the Food Banks of Iowa and help those who are in need.”