You are here: Home / Crime / Courts / Cannabis oil debate may resume in 2015 legislature 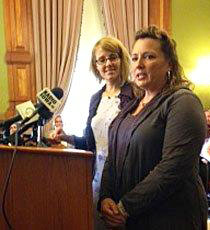 Maria La France & Sally Gaer are parents who want lawmakers to make it easier to get cannabis oil to treat their children. (L-R)

Three key state policymakers have varying opinions about whether to change the Iowa law that decriminalized possession of cannabis oil as treatment for chronic epilepsy.

The parents of children who suffer from multiple seizures say it’s impossible to get the marijuana derivative and they’re asking lawmakers to allow the production and sale of cannabis oil in Iowa. House Speaker Kraig Paulsen, a Republican from Hiawatha, does not anticipate legislators will take that kind of action to expand last year’s bill.

“The objective of that bill was not to take parents and families that are in this situation and somehow they end up in prison for trying to take care of their family,” Paulsen says. “…That’s what it was intended to, to decriminalize possession.”

Senate Democratic Leader Mike Gronstal of Council Bluffs says the pleas of those parents will get a hearing.

“It’s decriminalized, but impossible for people to access the non-intoxicating oil,” Gronstal says, “I don’t think that does much in terms of solving the problem, so if we could find a way to do some tweaks to this legislation, I’m certainly open to that.”

And Governor Terry Branstad isn’t necessarily closing the door either, but he’s not embracing changes in the law.

“I think we also need to be concerned about unintended consequences,” Branstad says. “That’s what both the medical community and law enforcement last year and I think that’s why the legislature came down where it did.”

Branstad says Iowa policymakers should review similar laws that were passed last year in Utah and Alabama, plus he suggests Iowans soon may be able to legally obtain cannabis oil in Illinois. The State of Illinois has legalized the production, sale and use of marijuana for medical purposes, but while that law took effect more than a year ago, Illinois has yet to award dispensing licenses and none of the more than 600 patients in Illinois who have permission to get the drug have gotten it.

The parents of children with chronic epilepsy in Iowa say no other state where cannabis oil is currently sold will allow out-of-staters to buy it, plus they’d be in danger of arrest as they transport it back to Iowa through states where it is illegal.

Branstad, Gronstal and Paulsen made their comments during The Associated Press Legislative Forum yesterday at the statehouse.