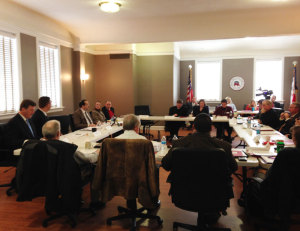 Iowa Republican Party leaders have unanimously decided to hold a straw poll, with the Iowa GOP’s chairman stressing it is a “snapshot” of the presidential race with “no binding effect” on the Iowa Caucuses.

“The Iowa Straw Poll lives!” Jeff Kaufmann, the chairman of the Republican Party of Iowa, said just after announcing the committee’s 16-0 vote.

Kaufmann told reporters he hopes to nail down the when and where within a month, but the Iowa Straw Poll will be held somewhere in central Iowa, sometime in August. He indicated the three likely venues are the Iowa State Fair, the fields near Boone where the Farm Progress Show is held every other year and the Iowa State University campus in Ames. That’s where the past six Straw Poll events have been held.

Iowa Faith and Freedom Coalition president Steve Scheffler is one of Iowa’s representatives on the Republican National Committee. He’s also a voting member of the Iowa GOP’s state central committee and an advocate of continuing the Iowa Straw Poll.

“I am a big believer in it because it gives all candidates including candidates that don’t have a big name or a lot of money a chance to get out their messages,” said Scheffler, an organizer for the 1988 presidential campaign of Pat Robertson, who scored a surprise victory in the 1987 Iowa Straw Poll. “And especially with a compacted schedule this year that the RNC has put together, if we don’t have a Straw Poll only those candidates with the most money and the most name I.D. are going to have a chance to go forward.”

Loras Schulte of Norway, Iowa — another voting member of the Iowa GOP’s state central committee — agreed that the Straw Poll gives lesser-known candidates a chance to “really have an impact,” but Schulte said the Iowa Straw Poll also provides “a service” when candidates who fail to do well end their campaigns.

“If we don’t have this process that truly begins to winnow the herd, if you will — for better or for worse, it has served that purpose — I’d hate to come into Caucus Night in 2016 and have two dozen candidates still in the race,” Schulte said.

State Central Committee member Trudy Caviness of Ottumwa, the long-time chair of Wapello County Republicans, stressed that the Iowa Straw Poll isn’t all about the candidates, though.

“It brings Iowans into a political arena,” Caviness said. “Many times there will be young people that say, ‘I went to (my) first Straw Poll and I really now am excited about this,’ and, you know, to move our country forward we have got to have more informed and active both young people and old people.”

Over a year ago, Governor Terry Branstad suggested it was time to retire the Iowa Straw Poll after critics warned it endangered the status of Iowa’s first-in-the-nation Caucuses. National party leaders assured Iowa GOP leaders that was not the case and Branstad issued a written statement Saturday afternoon saying he looks forward to working with Iowa GOP leaders to make this summer’s Iowa Straw Poll “a successful event.” As for whether some candidates will skip it, as John McCain did in 2007 and Mitt Romney did in 2011, Kaufmann said the event’s ultimate aim is to get grassroots activists excited about being Republicans.

“So as long as we have candidates there, it’s going to accomplish those goals,” Kaufmann said during a brief midday news conference.

Kaufmann also suggested three of the six winners of past Straw Polls would likely be considered “establishment” candidates. Those would be George H.W. Bush, the victor of the very first Iowa Straw Poll in 1979, along with 1995 Iowa Straw Poll winner Bob Dole and George W. Bush, who won the 1999 Iowa Straw Poll.