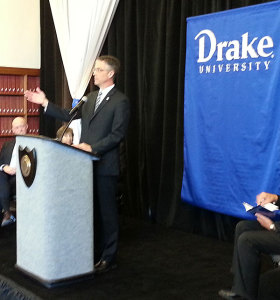 A man who has spent the last 10 years at Gonzaga University in Spokane, Washington will be the new president of Iowa’s largest private university.

Earl “Marty” Martin was introduced today at an event on the Drake University campus in Des Moines. “There are great things happening here in the classrooms, in the labs, in the recital halls, and on the stages. We’re going to build on that progress and make it even stronger,” Martin said.

“When you look at the list of gifts, what they’re going for, and how relevant they are to the educational experience that’s being delivered here at Drake — just speaks to the fact that you’ve got great generosity,” Martin said. “But, more importantly, you’ve got people who are willing to invest their resources in what you’re accomplishing and willing to say, ‘I know you can do even more if I provide you with this support. I know you can have an even greater impact on individual lives, on the community, and society as a whole,’ and they’re willing to support that effort.”

Drake has an enrollment of roughly 5,100 students. Martin plans to spend the next several months “listening and learning” from those students and the staff at Drake. “I want to sit with the students and hear what their hopes and aspirations are. What do they see in their future? What would they like to achieve? And what is it that Drake University needs to be doing to help them achieve that? That’s why we’re here,” Martin said. “We’re here to facilitate the success of our students and to support them when they leave us and to welcome them back into the community as often as we possibly can once they’re out there in the world.”

Larry Zimpleman, chair of the Drake University Board of Trustees, said there were 90 “highly qualified” candidates who expressed interest in becoming Drake’s new president.

“In narrowing that field, we sought a leader who would bring to Drake a passionate commitment to our mission, the liberal arts and professional education; significant experience in enhancing diversity; a deep understanding of excellent teaching and learning; a collaborative leadership style; and a vision for positioning the university to thrive in these challenging times,” Zimpleman said. “We have indeed found just such a leader to serve as Drake’s 13th president.”

Prior to his academic career, Martin served as a U.S. Air Force staff judge advocate officer in England, Germany, and the United States. Martin holds an advance law degree from Yale University and an undergraduate degree from the University of Kentucky. He is married to Laura Martin and they are the parents of two children; Cade and Case.