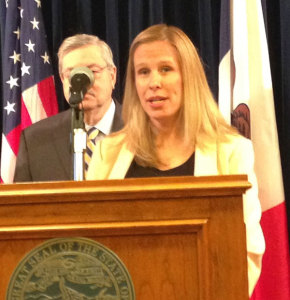 Two dozen teachers who are either married to a soldier or who are retiring from the military have gotten a temporary, three-year license to teach in an Iowa school. D.T. Magee, director of the Iowa Board of Educational Examiners, says the initiative ties in with the Home Base Iowa Act — signed into law last year.

Brooke Johnson is a special education teacher in Council Bluffs. The 32-year-old Johnson has nine years of teaching experience in five states. She has moved several times and says it can be time-consuming and costly to go through another teacher licensing process in each new state.

Johnson’s husband is in the Air Force and is now assigned to Offutt Air Force Base in Omaha. “My husband was deployed in Iraq and we had 90 days for me to get a job, find a house, and move here,” Johnson said. “When I Googled ‘teaching in Iowa’ and saw the military exchange license, it was a breath of fresh air. It was so nice to just receive reciprocity for all of my hard work.”

A new report from the Board of Educational Examiners shows five military veterans were issued teaching licenses in Iowa in 2014. Johnson was among 19 spouses of veterans issued a license.  “It is a huge relief to our family, so that on the weekends, I can spend time with my daughter and husband versus studying for tests and taking exams,” Johnson said.

Johnson and Magee spoke about the military exchange program on Monday at Governor Branstad’s weekly news conference with reporters at the statehouse in Des Moines.