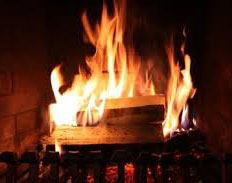 As Iowans strive to stave off winter’s chill with wood stoves and fireplaces, one expert says the age of the wood you burn makes a big difference in the amount of heat you’ll get from the logs.

Alison Davis, a former forester who’s now a senior advisor in the EPA’s Air Quality Office, says to avoid recently-cut wood and instead only use dry, seasoned firewood as it burns more completely and more efficiently.

“First, it means you get more heat out of the firewood so you use less firewood in the long run,” Davis says. “Second, it produces less smoke and that means it’s also producing less pollution that’s harmful to your health.”

Perfectionists can spend about $20 and buy a moisture meter which can accurately gauge the dryness of wood. Twenty-percent moisture content — or less — is ideal, she says. “There’s a really easy way to check to see if your firewood is dry,” Davis says. “Pick two pieces up and knock them together. If it sounds hollow, then your wood is dry and it will burn more efficiently.”

Just because a tree you find in the timber is dead doesn’t necessarily mean the wood will be dry enough to burn well. “It takes quite a bit of time to season wood,” Davis says. “If you’re buying firewood, test it now to see if it’s dry. If you’re cutting your own firewood for next year, know that soft woods take about six months to season and hard woods can take nearly a year.”

Dry wood burns more efficiently and produces less smoke, which she says is something for which Iowans should take note. “Wood smoke contains a number of pollutants,” Davis says. “One of the key pollutants is something called particle pollution which is harmful to health especially for people who have heart and vascular diseases or people with lung diseases such as asthma.”

Studies find those fine particles are linked to heart attacks and strokes. Besides particle pollution, Davis says there’s also the danger of smoke filled with toxins or harmful chemicals. She says to never burn plastics, foam or other trash, or wood that was coated, painted or pressure-treated.