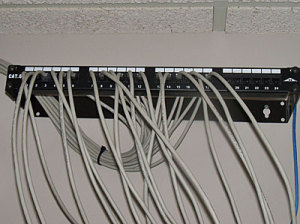 President Obama will talk about access to broadband in his visit to Cedar Falls.

President Barrack Obama is coming to northeast Iowa today where he will visit the Cedar Falls Utilities.

The director of the National Economic Council Jeff Zientz talked with reporters in a briefing prior to the trip. “When the president travels to Cedar Falls, he will be highlighting how towns around the country are banding together to bring more competition and faster, better broadband to their communities. Cedar Falls is a striking example of a town with broadband that works,” Zientz says

He says broadband access has become vital to business and individuals, but he says many Americans have little access or choice. “In fact, three out of four Americans live in a location that has no competition or no service at the broadband speeds increasingly required for on-line services,” according the Zientz.

Zientz says the president will announce several steps to deal with the situation. “The president is calling to end laws that harm broadband service competition,” Zientz says. “The president specifically is filing a letter with the Federal Communications Commission urging it to join this effort by addressing barriers prohibiting local communities from responding to the broadband needs of its citizens.”

He says the president will reveal new ways for rural areas to fund broadband expansion. “The Department of Agriculture is accepting applications to its community connect broadband grant program. And will also reopen its broadband loan program, which officers financing to eligible rural carriers who invest in bringing high-speed broadband to underserved rural areas,” Zientz says.

The president will also reveal other aspects of his proposal during his stop in Cedar Falls. He is expected to speak around 2:30 p.m. The visit by the Democrat president comes the day after Republican Governor Terry Branstad reiterated his goal of expanding broadband access to rural Iowa in his Condition of the State address.