You are here: Home / News / Branstad sworn in for sixth term, urges focus on population growth 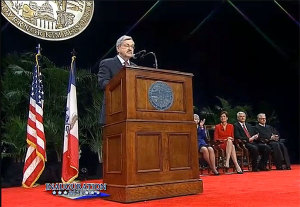 Terry Branstad has taken the oath of office for governor a sixth time. Branstad used his inaugural address this morning to urge legislators of both parties to “avoid partisan traps” and develop a “blueprint for growth” in the coming years.

“My message today is this: we are the architects of our future,” Branstad said. “This state that we love to call home, this heart of the heartland has an opportunity to grow.”

Kim Reynolds, Branstad’s running mate in 2010 and 2014, also took the oath of office this morning, for a second term as Iowa’s lieutenant governor. During her brief speech, Reynolds talked about the “enormous responsibility” she feels for the generations of Iowans to come.

“We have an obligation to create and promote a strong quality of life, a robust economy and a disciplined approach to government that benefits all Iowans,” Reynolds said.

The Inaugural Ceremony was held in a convention hall in downtown Des Moines and organizers said about 1,600 people were there to witness the event. Branstad began his remarks by thanking his family and the voters of Iowa. 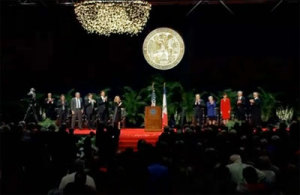 The stage for the governor’s inaugural.

“I still marvel at a system and a state where a poor north Iowa farm boy can be elected governor,” Branstad said. “It remains a great honor and privilege to be chosen by the people of Iowa again and again to serve as your chief executive.”

Branstad said Iowa is “prospering” but he warned a lack of population growth will impede future development.

“The generational challenges that our state faces, the opportunities we must embrace call for a tried and true way of doing business in Iowa: working hard, setting long-term goals and making sacrifices to build Iowa’s future,” Branstad said. “Are we willing to make these commitments for Iowa?”

Branstad outlined a series of initiatives he argues will lead to both economic and population growth in the state, including an emphasis on getting students excited about subjects like science and math the moment they start school as well as getting high-speed internet access throughout the state.

“Looking around this room today, I know we can meet the challenge our state faces,” Branstad said. “It’s what we’ve always done. Embracing challenges and exceeding expectations is what makes our state so great.” 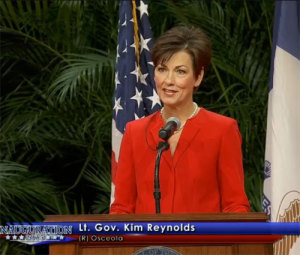 Senate President Pam Jochum, a Democrat from Des Moines, was the mistress of ceremonies for today’s event and she concluded with this response to Branstad’s remarks: “Congratulations Governor Branstad, Lieutenant Governor Reynolds and the legislature is ready to work with you to move our state forward.”

Branstad then led the crowd in another round of applause. Branstad, who turned 68 in November, closed his own speech by urging Iowans, and legislators in particular, to “embrace change.”

“My solemn promise to you to today is to always meet our challenges head on, earnestly and with building a more successful Iowa future as my guide,” Bransad said. “I’m ready to once again work with you to build Iowans future, so let’s build it well. Let’s build it together.”

After a two-hour reception at the governor’s mansion early this afternoon, the governor will attend an open house at the statehouse from 2-4 p.m.

A private reception is scheduled at 6 p.m. for those who donated the $1.25 million to put on today’s event, although the cost of inaugural festivities is about $400,000. The rest of the money raised will go into an endowment, for college scholarships.

A formal dinner and inaugural ball will be held from seven ’til midnight.