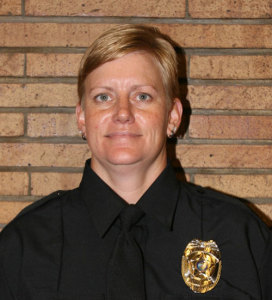 A Sioux City Police officer is speaking publicly for the first time since she shot back on October 3. Jill Ohm had responded to a call of a possible suicidal person on the city’s west side. Upon arrival, Ohm said a young man came out of a house and appeared to have a gun.

“I reached for my weapon as soon as I saw him coming at me, then I saw the weapon in my face,” Ohm said. “I had to decide if I was going to fight with him and his gun and that’s what I decided to do.”

Ohm remembers hearing two shots, one of which struck her in the chin. “It went through my chin, tumbled under my tongue area, nicked my larynx, and ended up a little ways from my spinal cord in some soft tissue. As of right now, (the bullet) will stay there,” Ohm said. The suspect in the shooting, 27-year-old Noah Ironshell, ran away up the street. Ohm went to call for help.

“I remember walking over to the squad car to look in the window to see if I could see and at that point, I could feel the blood going down my throat and my throat tightening up a little bit,” Ohm said. Ironshell was found later that day in an abandoned house and died from a self-inflicted gunshot wound. Ohm’s jaw was shattered and surgeons decided it was safer to leave the bullet alone because it lodged near her spinal cord.

While she was hospitalized, residents of Sioux City showed support for Ohm and the police department by shining blue lights on their porches and in windows. “I heard about it when I was in the hospital and I thought it was very cool…I just want to say thank you to everybody who supported me,” Ohm said, choking up a bit with emotion.

The 37-year-old Ohm — who returned to active duty on January 6 — was to be married last year, but the shooting and the recovery from her injuries force a postponement. She and her fiancé, who is also a Sioux City Police officer, will be married on February 21.