You are here: Home / Education / Board of Regents president promises ‘broad and inclusive’ search committee for U-I president 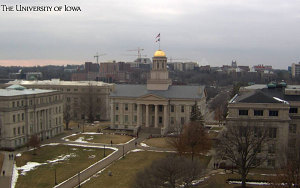 University of Iowa webcam view of the campus.

The president of the Iowa Board of Regents promises an open search that includes a lot of input for the new University of Iowa president to replace Sally Mason who is retiring at the end of July.

Critics say there was not enough input from those on campus when Mason was hired, and Regent’s board president Bruce Rastetter says there are several factors that will make this search different.

“You have an existing board that did not do that 2007 search, and that has done two successful searches at Iowa State University and the University of Northern Iowa with very broad and inclusive committees,” Rastetter says. “And I think the importance of making sure that the search is successful is doing that.”

The board president says the U-I search committee will be a lot like the ones used at the other two schools. “I think if you talk to faculty and governance councils on both campuses they would say that it was inclusive, it was open and it was transparent — and we brought the candidates to campus. So, we will follow a similar model and timeline,” according to Rastetter.

The board held a special meeting Tuesday to accept Mason’s retirement, and also directed the executive director of the Board of Regents to begin the process of hiring a search firm. Rastetter also issued his assurance that they will not rush to find a replacement. “I think it’s important to note that we’re not going to get in a hurry with this, we are going to take our time,” Rastetter says.

He says the search committee will be similar to the ones used in Ames and Cedar Falls, but not exactly the same. “Obviously all three universities are different and unique in their own right,” Rastetter says. “And certainly the large medical center that the University of Iowa has, the number of grad programs are different, and so that will be taken into account as we take our time forming a search committee.”

Rastetter says the whole process could stretch beyond Mason’s retirement date. “There’s a very distinct possibility that there will be an interim president appointed when Sally effectively retires July 31st,” Rastetter says. “I want to say that at the outset, because we will not be backed into a short time table to rush things.” He says the search for Mason’s successor will be nationwide, but will also include any candidates on campus that are interested.