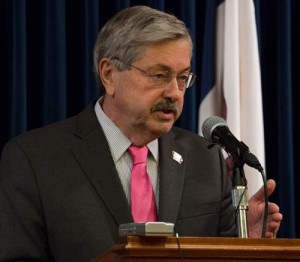 Governor Terry Branstad says his administration won’t be violating state law if they continue to run “significant” prison operations and a military-style academy on the Mental Health Institute campuses in Mount Pleasant and Clarinda.

“Those are now multiple-use campuses and both Mount Pleasant and (Clarinda) have significant operations there as well,” Branstad says. “And so those facilities will not be closed.”

But a state senator from Mount Pleasant argues Iowa law requires the state to provide in-patient care for mentally ill patients at both sites. Branstad says the attorney general’s office has assured him what he’s proposing is legal.

“We’re not closing the facilities,” Branstad says. “…Neither one of them are accredited. At Clarinda, the psychiatrist is about ready to retire and Mount Pleasant has not been able to attract a psychiatrist, so to be able to provide quality mental health services to people we think they can better be served at the other two institutes and community mental health and with the help of the University of Iowa Hospitals and Clinics.”

Key legislators say they were “disturbed” because they didn’t learn of Branstad’s plan to close the two mental health care facilities in Mount Pleasant and Clarinda until they were shown the details of Branstad’s proposed budget. Branstad rejects the complaint that he hid his intentions until the very last-minute.

“We didn’t hide anything,” Branstad says. “We put a budget together that was not an easy budget to put together in light of the fact that the cost of Medicaid is going up dramatically.”

The federal government is picking up a smaller portion of Medicaid spending in Iowa, because of a formula that sends states with better economies less than other states where the economy is dragging. Branstad says that means the budget for the Department of Human Services was tought to draft — and the Mental Health Institutes are managed by the department.