You are here: Home / News / Roar of motorcycle engines drowns out anti-gay protest at capitol 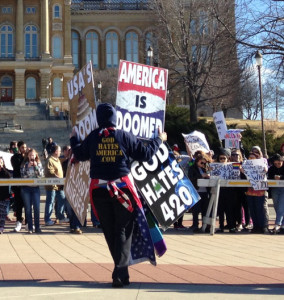 A protestor from the Westboro Baptist Church.

Five protesters from an ultra- conservative Baptist church in Kansas are at the statehouse today, but no one can hear their chants or songs.

The church often protests at the funerals of American soldiers, arguing the soldiers’ deaths are punishment for the country’s tolerance toward gays and lesbians.

A group of motorcyclists formed to provide a barrier between the Westboro Baptist Church protesters and the people gathered at those funerals to pay their respects to the soldiers are at the statehouse today  — their engines roaring to drown out the group’s message.

The heavy smell of exhaust fumes from the motorcycles hangs in the air. It comes from a long line of bikes parked along the street just west of the state capitol building. 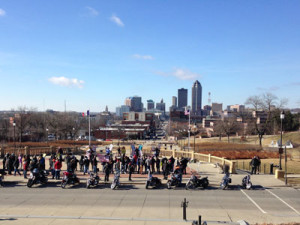 Motorcyclists at the protest.

The west windows of the statehouse are vibrating from the roar and some of the military veterans inside the statehouse have been going outside, making their way down a long stretch of steps to the street to thank the engine-revving cyclists.

An even larger group of people staging a counter-protests are there, too, to show their support of same-sex marriage in Iowa.