You are here: Home / News / Weather taking a swing back toward the warm side 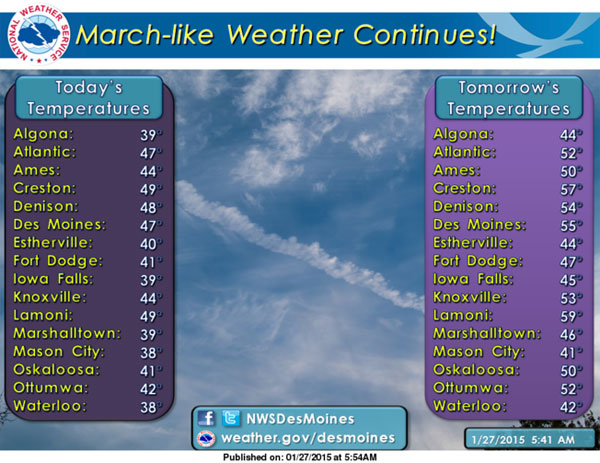 It’s feeling more like March, rather than late January, across much of Iowa this week.

National Weather Service meteorologist Craig Cogill says tomorrow will be even warmer with many locations likely to break record highs for January 28.

“Forecast highs around Des Moines are for the mid to upper 50s, so it certainly looks possible that we break a record tomorrow — with the old record being 56-degrees back in 1931,” Cogill said.

Some sections of western Iowa are expected to post temperatures in the 60s tomorrow.

More winter-like weather will return to the state soon, as a cold front pushes in tomorrow night and snow could be falling this weekend. “We’ll have cooler temperatures Thursday and Friday, but still above normal for this time of year, with highs in the 30s for much of the state,” Cogill said.

“Into the weekend, we’re going to see a storm system move up from the Southwestern United States with a good chance of snow especially over central and southern Iowa with a few inches of snow possible by Sunday.”