You are here: Home / Business / Brewery promises to give profits to Food Bank of Iowa 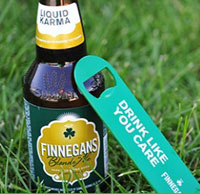 Finnegans Brewery promises to give profits from beer sales to the Food Bank of Iowa.

Iowa’s largest food bank is aligning with an unlikely new partner. A Minnesota-based brewery will start selling beer in Iowa next month with officials claiming 100% of the proceeds will go to the feeding the needy.

Christina Zink, spokeswoman for the Food Bank of Iowa, says Finnegans of Minneapolis has made a remarkable commitment to the Des Moines-based charity which serves 100,000 Iowans a year.

“Finnegans is now going to be selling their products here in Iowa and when people purchase the beer at local places, the Food Bank of Iowa wins,” Zink says. “The money that we receive is going to help buy fresh produce for people in need. It’s an expensive product to buy that’s important to get into people’s diets.”

Finnegans was founded 15 years ago on the premise of “turning beer into food,” according to the brewery’s website. It claims during 2012, Finnegans raised more than $100,000 from the sale of its Irish Amber and Blonde Ale, donations that went to purchase more than 140,000 pounds of locally grown produce for local food shelves.

Zink was asked how much money the Food Bank of Iowa could expect from the new agreement. “I have no idea but we’re really excited about the partnership and seeing where this goes,” Zink says. “It’s worked really well with the other states that they’ve been in and we’re looking forward to seeing the response of Finnegans and the consumer.”

An economic report out last week found wages nationwide aren’t keeping up with inflation as the median family income has been at $51,000 for 15 straight years. Zink says demand is rising every year at the food bank, which serves people in 55 of Iowa’s 99 counties.

“The need is definitely going up, for a couple of reasons,” Zink says. “People are reaching out for help at the same time as…incomes do go up a little bit and SNAP benefits go away but people are still in need to make ends meet and we’ve definitely seen the need go up at our partner agencies.”