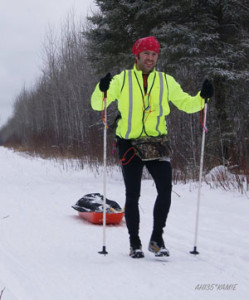 A northwest Iowa resident has completed what’s considered one of the world’s toughest endurance challenges. Jason Davis, a Sioux City firefighter, competed in the Arrowhead Ultra Marathon in International Falls, Minnesota last week. He covered 135 miles on foot while pulling a 33 pound sled carrying his gear in frigid conditions.

The 40-year-old Davis set up a tent and took a few short naps along the route. There were also three checkpoints for participants to regroup and rest. “At the middle checkpoint, which was mile 72, I did sleep and change. I took three hours at that checkpoint just because my body was really depleted,” Davis said. This was Davis’ second attempt at completing Arrowhead. Last year, he made it to mile 40 before pulling out in 40-below zero conditions.

This year, he finished the course in just under 53.5 hours. Just over 110 miles into the race, Davis had quite a scare as he ran through the northern Minnesota woods. “I came around a corner and there was a wolf feeding on a deer carcass. Besides all the physical and mental challenges of the race, that was something that kind of spooked (me),” Davis said. “I sped up as fast as my body would take me at the time.”

Davis finished 24th overall — with 44 out of 77 entrants making it to the finish line. Davis hopes to one day compete in the Alaska Iditarod race through that state’s wilderness.