You are here: Home / News / Rand Paul says he’s a conservative, ‘with a little bit of Libertarian-ish flavor’ (AUDIO) 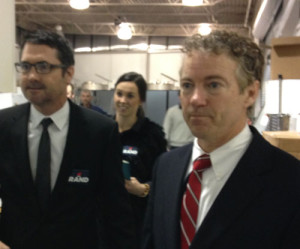 Kentucky Senator Rand Paul said tonight that he’s assembling a team of “professional” campaign people and will announce as soon as next month whether he’s running for president — to “develop momentum” and send the message that he’s a “serious” contender for the Republican nomination.

Paul is on his first campaign swing through Iowa this year, with stops in Marshalltown and Ames Saturday. A crowd of about 200 gathered at the Jasper Winery in Des Moines tonight to hear Paul rail against the policies of The Federal Reserve.

“Anybody here want to audit The Fed?” Paul asked at the beginning of his speech, getting a rousing chorus of “Yeah!” from the crowd.

Many of those listening, like Mike Studer of Ayrshire, supported the senator’s father, Ron Paul, when he ran for president in 2012.

“I know that Rand comes from good stock, but I think he is just a little too friendly with the other side of the aisle,” Studer said.

Christine Dopf of Windsor Heights and her husband also supported Ron Paul in 2012 and the Dopfs are likely to back Rand Paul in Iowa’s 2016 Caucuses.

“I think he’s got a lot of the Libertarian leanings, but I think he appeals to a broader base as well,” Dopf said as she held the couple’s baby. “I think he’s trying to break into the Republican Party and kind of reinvent it.”

During his speech, Senator Paul got applause when he railed against the Obama Administration’s surveillance program, but the crowd also cheered when Paul expressed a willingness to work with President Obama on the issue of criminal justice reform.

“I think putting a kid in jail for 55 years for selling marijuana is obscene,” Paul said. “We ought to get ’em back to work and into productive use (in society) and not put ’em in jail forever.”

During the interview after his speech, Paul argued his sentencing reform message resonates with young people, in particular, and can bring new people into the GOP.

“And I think that maybe what’s unique about maybe a candidate who has a little bit of a Libertarian-ish edge,” Paul said.

“I’ve been coming to Iowa off and on, you know, for seven or eight years with my family. I’ve never found anyone in Iowa that really was sort of like: ‘Oh, no. We don’t want you here,'” Paul said. “In fact I think it’s even better than it once was because people realize that, ‘You know what? If he all of a sudden brought in 15,000 kids going to Iowa colleges to vote, that would be enormous.’ Particularly if they voted in the General Election…that could make the difference.”

And Paul “discounts” the contention from some in the party that his hiring of former Iowa GOP chairman A.J. Spiker will doom his candidacy. Spiker is a paid staffer for Paul’s PAC. The National Journal this week called Spiker the “Iowa albatross” to Paul’s campaign.

“It’s kind of like in Washington, we tend to report controversy and we don’t report conciliation that much and in Washington there’s a lot less yelling and screaming than you’d think, really, and I think that’s so here in Iowa,” Paul said. “And we have people who I think are friendly with people from every sort of walk of life and that’s my goal, not to be pigeonholed just in one section of the party. I’m also a conservative in most of my policies. I would be someone who’s conservative, with a little bit of Libertarian-ish flavor.”

Paul will appear in Marshalltown Saturday morning with Congressman Rod Blum, who is a liberty movement Republican. According to his schedule, Paul will be in Ames in time to witness the first half of the ISU men’s basketball game against Texas Tech in Hilton Coliseum before going to the building next door to watch the second half of the game with College Republicans and Young Americans for Liberty.