You are here: Home / Agriculture / Iowa ethanol part of project to help end deforestation in Haiti 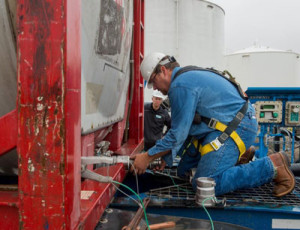 Justin Easterday from the POET Biorefining plant in Jewell loads ethanol for shipment to Haiti.

Two ethanol plants in central Iowa are helping fight pollution and deforestation in Haiti through an effort to replace home cooking stoves that burn wood or charcoal with stoves that use clean-burning ethanol.

Van Hulzen says it’s no easy process to get the Iowa-made, corn-based fuel out of the country. “It takes a special certification and international approval to ship ethanol, which is considered a hazardous material because of its flammability,” Van Hulzen says. “POET Biorefining/Jewell is one of the POET facilities that’s been approved to ship this product internationally.”

POET facilities in Jewell and Gowrie are now shipping the ethanol and cook stoves to Haiti through a partnership with Project Gaia. He says the roots of the agreement date back to 2009. “POET founder Jeff Broin actually met the executive director of Project Gaia, Harry Stokes, at an international conference promoting environmental stewardship,” VanHulzen says. “The two of them struck up a relationship, started talking and very quickly, both of them realized the potential for U.S. ethanol to help in third world countries with home-cooking applications.”

The first shipment of ethanol from Iowa finally reached its destination a little over a month ago after a lengthy journey. “It left POET/Jewell on October 1st and took about three weeks to get to port in Port-au-Prince, Haiti, and then another couple of months to get past customs,” he says. “But on December 31st, we got word from our commercial partner, Novogas in Haiti, that they had taken possession of the first 6,200 gallons of fuel.”

Van Hulzen says the ethanol-fueled stoves are becoming popular in Haiti as they provide instant heat versus having to wait for the fire to catch. Also, he says they’re much cleaner-burning stoves compared to essentially using charcoal grills indoors.