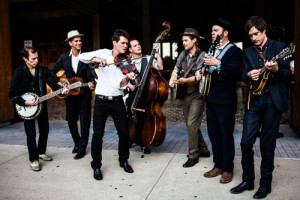 Sam Summers has organized the Hinterland Music Festival to be held July 31 and August 1 in Des Moines’ Water Works Park. “I think it’s such a great location for a concert,” Summers said. “It’s 1,500 acres of wide-open land, backwaters, trees…everything that kind of makes Iowa awesome.”

Tennessee-based, Grammy award winning folk act Old Crow Medicine Show will co-headline the festival along with California’s Edward Sharpe and the Magnetic Zeros. Summers is co-owner of the Des Moines music venue Wooly’s and, as the owner of First Fleet Productions, helps book the city’s Nitefall on the River concert series.

Summers is hoping to make the Hinterland Music Festival an annual event that will grow larger in years to come. “You know, I’m funding it myself, so I didn’t want to bite off too much. I’m keeping it what I would consider ‘scaled’ this year,” Summers said. “We’re keeping it at 8,000 capacity.”

Other acts on the Hinterland bill include Future Islands, TV on the Radio, Brandi Carlile, Yonder Mountain String Band, and St. Paul & The Broken Bones. Tickets to the festival go on sale February 20 at www.hinterlandiowa.com.