You are here: Home / Business / Accumold adding 200 jobs with expansion in Ankeny 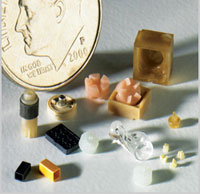 This photo from Accumold’s website shows the size and types of parts they company produces.

A central Iowa company is expanding with the addition of a 40,000 square foot facility. Accumold president and CEO Roger Hargens says demand is driving the Ankeny company’s expansion.

“We design and build critical components for our customers that go in different devices, whether it’s a medical device, an implantable device, a surgical device or hearing device of any kind. We make those critical components that make their products work,” Hargens explains. “Same in micro electronics for smart devices as well as optical high-speed data communication devices.”

The company has 221 employees and last expanded back in 2010. The latest expansion will create more jobs.”We’re looking at adding at least 200 additional employees over the next three years,” Hargens says. He says they have a variety of jobs that’ll be available. “We’ll be adding production people, tooling people, maintenance people, processing people, quality techs, quality engineers, project engineers, a good cross section — with the majority being in the production environment,” Hargens says.

The new building will cost around $10 million dollars, and Hargens says the cost was quite a bit more this time as the structure is being built to withstand severe weather up to an F-5 tornado. He says the extra cost will ensure there’s not interruption of production. Hargens says their customers are always looking at ways to reduce their risk, and with Accumold being the sole source of components for 95-percent of its customers, this facility ensures they can deliver the parts to the customers.

Hargens says they hope to have the new building ready by early next year. “We will be starting construction as soon as we can here in the spring, and we hope to occupy it by the end of January 2016,” according to Hargens. The company is not waiting for the building to get done to start adding new employees, as they have already hired 18 new employees.

They plan to hold a job fair at the facility in Ankeny on February 21st from 10 A.M. until 2 P.M. to share information on the new jobs. For more information, to to their website at: www.accu-mold.com.