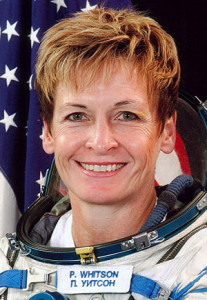 Astronaut and Iowa native Peggy Whitson is being assigned to another six-month mission aboard the International Space Station, what will be her third trip into orbit.

Whitson has already spent 377 days in space, more than any other woman, and she’s thrilled by the chance to return. The space station has grown in size with several additions since Whitson was last there in 2007.

“The U.S. has scientific facilities in both the European and the Japanese laboratory so it’ll give me a lot more places to do different science,” Whitson says. “Most importantly, the cupola was added on since I was there last. I’m looking forward to the view from the cupola.”

Whitson is a Beaconsfield native and she turned 55 this week. She was the space station’s first science officer, its first woman commander and she set records for spacewalks for a woman and for the most days in space for a woman. She also holds two patents for her work in biomedical research.

In an interview with Radio Iowa, she was asked if there’s one accomplishment for which she’s the most proud. “I feel really lucky and honored to have had an opportunity to be in the right place at the right time for all of these things,” Whitson says. “Any one of them, the opportunity to live in space for over a year is a very special one and I’m really excited about the opportunity to get to live up there another six months.”

During one of her previous missions, Whitson did a little space farming — she grew soybeans in the lab. There are certain to be more experiments involving plants in her upcoming mission, but the details are still in the distance. “You can’t set your mind too much on the specifics of the mission in advance because the one thing that is super-sure is that it will change,” Whitson says. “You have to be flexible enough to go with the flow and adjust your expectations as you’re going along.”

Since America’s space shuttle program is over and a replacement spacecraft is still in the testing phase, Whitson and two crewmates will blast off in December of 2016 aboard a Soyuz rocket from a Russian launch pad. Relations between the U.S. and Russia are strained right now, given the Ukraine situation, but Whitson isn’t worried about diplomatic issues overshadowing or threatening her mission.

“The international partnership is stronger that the political issues that are going on right now,” Whitson says. “What’s really great is, the crew members on board, this is your family and you live with them and it doesn’t matter — the politics on earth don’t matter.”

Training for the next mission won’t be a breeze, but she anticipates it will be easier, since she’s already gone through the process twice before. Will this next mission into space be her last? Hopefully not, she says: “If my body can hold out, I’d be happy to keep going.”