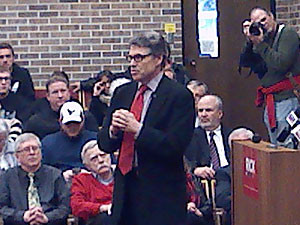 Former Texas Governor Rick Perry sounded like a presidential candidate as he spoke Monday during a town hall meeting at Morningside College in Sioux City.

Perry is expected to run for president again in 2016 and says after finishing fifth in the Iowa Caucuses in the last Republican race, he regrets he didn’t campaign more in the state.

Perry talked about the illegal immigration into the U.S., and says President Barrack Obama hasn’t properly placed border agents. “The 150-mile sector from Brownsville basically north, is where 54-percent of the apprehensions occur,” according to Perry. “When I met with the president in June, he was not aware that his policy was to have the border patrol 45 to 50 miles back away from the border in an apprehension mode, rather than in a prevention mode.”

He says the federal resources have to be used in the right way to stop the inflow of illegals. “Put the boots on the ground, put the personnel down there, have the strategic fencing in places, and then use the aviation assets with fast response teams. That’s the one thing that the federal government is really failing at,” Perry says. He says he doesn’t think “the president is really interested in securing the border,” as he says Obama did not take him up on his offer to fly down and look over what needs to be done.

Perry used the Texas National Guard to help secure the border with Mexico. He says the border has to be first be secured before we can have an effective national immigration policy.