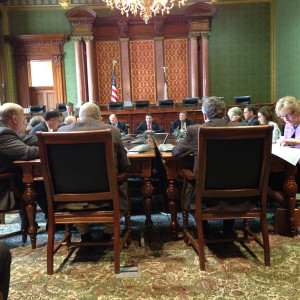 The bill to raise Iowa’s gas tax by a dime-a-gallon cruised to approval in the House Transportation Committee Wednesday afternoon.

It passed on a 16-5 vote. Representative Josh Byrnes, a Republican from Osage, has been pushing for the last four years to raise the state tax on motor fuel.

“It’s never easy when we start talking about tax increases, but I do feel that at the end of the day this does seem to be the right mechanims for what we need to do,” Byrnes said during yesterday’s committee meeting.

State gas taxes, along with vehicle registration fees, are placed in a state fund that must be spent exclusively on road and bridge projects, but Iowa DOT officials say with improvements in the fuel effiency of vehicles, that fund is running at least $215 million short each year.

Byrnes said he’s been presented with a number of “interesting…outside the box” alternatives, but raising the gas tax ensures those who use the roads — including out-of-staters who drive through Iowa — pay for the upkeep. “This is something that needs to be done for the state of Iowa,” Byrnes said.

The committee rejected the idea of phasing in the proposed tax increase over the next 12 months. None of the bill’s opponents spoke during the committee meeting.

On Tuesday the Senate Transportation Committee also approved a bill to raise the state gas tax by 10 cents a gallon. The bills must also clear the tax-writing committees in both the House and Senate before a debate can start in the 100-member House or the 50-member Senate.