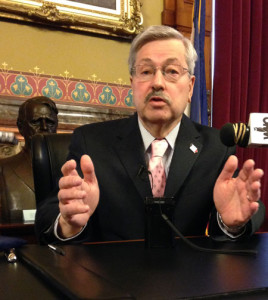 Governor Branstad talks to reporters in his formal statehouse office.

Governor Terry Branstad says unless there is a glaring technical error, he intends to approve the bill that would raise the state gas tax by a dime a gallon on Sunday.

“It is very likely I’m going to sign it and you’ll know very soon,” Branstad told reporters this morning.

That’s because once an Iowa governor receives the formal copy of a bill, he or she must sign or veto it within the following three days.

“I do intend to sign it this week,” Branstad said.

Branstad got the formal copy of the gas tax bill this morning, shortly after nine o’clock, so he has a Saturday deadline for action. Branstad said he has a responsibility as governor to carefully review the final copy, but he doesn’t expect to find a problem that would prevent him from signing the bill into law.

“What’s in this bill is not a surprise because we have worked and looked at all the different options and worked with the legislative leaders as they developed this,” Branstad said, “and then worked through the committee processes in the House and Senate.”

In a span of less than two-and-a-half hours the bill cleared both the House and the Senate yesterday with bipartisan support.

“This is a great example, on a difficult and controversial issue, of the kind of bipartisan cooperation that really makes Iowa stand out as a state where we work together and we get things done,” Branstad said this morning.

Critics of the gas tax hike say Iowa retailers will now be selling the most expensive fuel in the region. Many legislators who opposed the bill said they agree there’s a need for more money to fix Iowa’s transportation system, but they favored cutting other areas of the state budget and diverting that money to road and bridge projects.