You are here: Home / News / February makes the top 10 in weather records for cold and snow 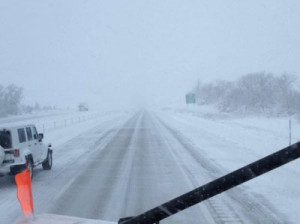 February was the 9th snowiest on record in Iowa.

State Climatologist Harry Hillaker says February will go into the record books in the top ten in both cold and snow. Hillaker says the persistent cold is probably the thing that stands out the most about the month.

“Actually only had five days where the statewide average temperature was above normal,” Hillaker says. Those five consecutive days above normal were from February 6th through the 10th.

Temperatures really dropped at the end of the month. “Our lowest temperatures of the month — actually for the whole winter — came on the last two days of February. Stanley, in Buchanan County in northeast Iowa got down to an official minus thirty degrees the morning of February 27, that’s actual temperature, not windchill,” Hillaker says, “and the next morning, Elkader in Clayton County, also got down to minus 30 degrees.”

February was just a little snowier than normal. Hillaker says most of the snow came in one storm at the beginning of the month, but overall it was the ninth snowiest and ninth coldest February. The state has kept weather records for 143 years. Overall the winter hasn’t been anything too out of the ordinary.

“We are running just a little bit above normal in the snowfall, again thanks in large part to February,” Hillaker says. “So far this winter, about two-point-seven inches above normal for snowfall, which would put us at the 45th snowiest winter.” Hillaker says winter’s worst is probably past us now as the days get longer with more sunlight heading into March.