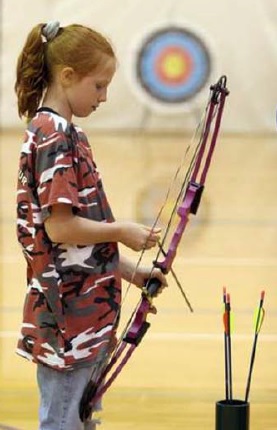 Thanks in part to so many superheroes wielding the bow and arrow in comics, movies and on TV, archery is becoming more popular in Iowa.

Up to 1,000 young archers from 50 Iowa schools will compete in this weekend’s Archery in Schools Program state tournament in Des Moines.

Hunting enthusiast Steve Finegan is thrilled to see the growing interest in the sport.

“The beauty of this is, it’s a program that kids of just about any ability can participate in,” Finegan says. “It’s not just for your finest athletes and that kind of thing. It’s definitely for boys and girls and they participate from elementary school all the way up to high school.”

The archery tournament is part of the Iowa Deer Classic, Iowa’s largest hunting show, which is also underway this weekend.

Finegan is the show manager and says the popularity of deer hunting is not on the wane, though figures from the Iowa DNR indicate the population of targets may be falling.

“The number of deer harvested is going down, however, the quality of deer harvested seems to be going up,” Finegan says. “More and more people are into the trophy aspect of hunting and they’re letting younger deer walk and only harvesting the bigger deer, so we’re seeing just as many big deer as we saw in the past.”

At least 25,000 people are expected over the three-day event, and Finegan says a host of contests and seminars are planned along with all sorts of displays for nature lovers.

“We bring in about 300 exhibitors from the outdoor world from throughout the state, in fact, from all over the world,” Finegan says. “I’ve got them from New Zealand and Canada and Africa and all points, outfitters, people selling different kinds of sporting gear.”

The Iowa Deer Classic is being held today through Sunday at the Iowa Events Center in Des Moines, while the student archery tournament is Saturday only.