You are here: Home / Agriculture / Ag Summit ‘naughty or nice’ list: 6 of 9 candidates back ethanol mandate 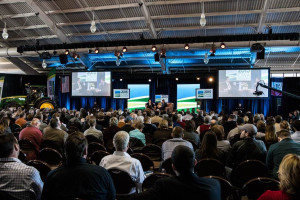 Nine men who say they may seek the Republican Party’s 2016 presidential nomination sought approval from farm country this weekend.

The first-ever Iowa Ag Summit convened early Saturday morning, with Governor Terry Branstad warning participants not to “mess” with the RFS. The Renewable Fuels Standard is the federal mandate that requires a set amount of ethanol to be blended into gasoline and diesel fuel each year.

Monte Shaw is the executive director of the Iowa Renewable Fuels Association and he told Radio Iowa a candidate’s stand on the mandate will be a deciding factor for some Iowa voters.

By Shaw’s count, six of the nine prospective candidates who showed up Saturday support the ethanol mandate. Former Florida Governor Jeb Bush was among those who expressed temporary support for it. “I would suggest to you that, ultimately, whether it’s ethanol or any other alternative fuel — renewable or otherwise, the market’s ultimately going to have to decide this,” Bush said.

Wisconsin Governor Scott Walker gave the same kind of conditional support. “In general, on any issue, I’m somebody that believes in a free and open market,” Walker said. “I don’t like a whole lot of government interference…but I do believe it’s an access issue.” New Jersey Governor Chris Christie said the Obama Administration should “follow the law” and quickly set the ethanol production standard for 2015. Others, like former Arkansas Governor Mike Huckabee, former Pennsylvania Senator Rick Santorum and South Carolina Senator Lindsey Graham gave a full-throttle endorsement of ethanol. They argued it was as much a national security issue as a way to achieve energy independence. “Well, every gallon of ethanol you can produce here in Iowa is one less gallon you have to buy from people who hate your guts, so keep it up,” Graham said, smiling and laughing as the crowd laughed and cheered.

The two candidates from oil-rich Texas, however, gave the ethanol mandate a thumbs down. Former Texas Governor Rick Perry reminded the audience that five years ago he’d tried to get the EPA to waive the ethanol mandate for his state. Texas Senator Ted Cruz was even more direct. “Look, I recognize that this is a gathering of a lot of folks who the answer you’re like me to give is: ‘I’m for the RFS, darn it!'” Cruz said. “…But I’ll tell you, people are pretty fed up with politicians who run around and tell one group one thing and another group another thing and then they don’t go to Washington and do anything they said they would do.”

And former New York Governor George Pataki told the crowd the government should never tell people what products to buy. John Webster, a livestock producer from Runnells, Iowa, was among those who showed up Saturday to listen, but he doesn’t consider the ethanol mandate a make-or-break issue as he decides who might get his vote. “No, as long as they’re committed to staying with the position that they have,” Webster said. “I can understand Cruz’s position and I can also understand the others.”

Webster said he’s looking for a conservative who will reduce the size and scope of the federal government. Bud Hockenberg, a long-time Iowa GOP activist from West Des Moines, said most Caucus-goers are looking for a candidate who can win. “And no longer litmus tests are going to be important for specific issues, but win-ability because of the contrast with what Obama is doing is going to be very critical,” Hockenberg said.

The Iowa Caucuses are scheduled for February 1, 2016.