You are here: Home / News / Governor offers few clues of his views on gun-related bills (AUDIO) 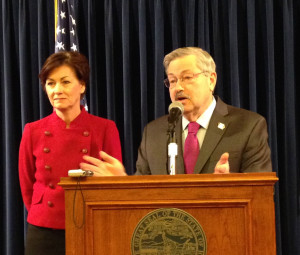 Governor Terry Branstad is neither embracing or rejecting bills pending in the Iowa House and Senate that would make changes to Iowa’s gun laws.

“I understand there are bills that are out of committee in both the House and the Senate, but they are considerably different,” Branstad says. “…We’re going to reserve judgment until we see what the legislature may agree upon in that area.”

Both bills, as currently written, remove the current restriction that makes it illegal for any child under the age of 14 to handle a pistol or a revolver. The proposed change means any child in Iowa could handle a gun, if they’re under the supervision of a parent.

“I think the key there is parent supervision,” Branstad says. “I think there are some families that feel the present (age) 14 restriction is unfair to their children and I guess that’s something the legislature is addressing.”

Another proposal included in the legislature’s gun bills would get rid of the state law that bans “silencers” — the devices that suppress the sound of a gunshot.

Branstad made his comments this morning during his weekly statehouse news conference.