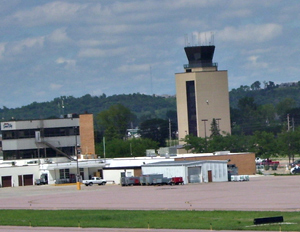 Tower at the Sioux City airport.

A commercial airliner made an unscheduled stop in Sioux City. A Jet Blue passenger airliner enroute from New York City to San Francisco made an emergency landing in at Sioux Gateway Airport Sunday evening.

Authorities say the co-pilot of the plane became ill and passed out during the cross country flight.

Upon landing in Sioux City, the man was transported to Mercy Medical Center where he was treated and later released. Passengers on the airliner were brought into Sioux Gateway’s terminal until another plane could be sent to complete their journey to the west coast.