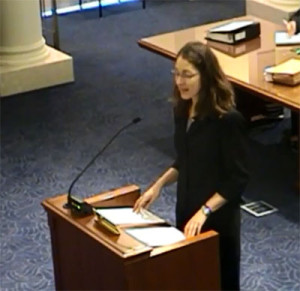 The Iowa Supreme Court heard arguments today over a rule created by the Iowa Board of Medicine that requires a doctor to be on hand when women are given drugs to induce an abortion. The rule effectively prevents the use of using webcams or teleconferencing to dispense abortion-inducing drugs to patients in remote locations. A district court ruling upheld the rule.

Planned Parenthood sued seeking to overturn the rule saying it is unconstitutional, and attorney Alice Clapman argued the rule creates several problems for women. “The health risks from a delayed abortion, the loss of autonomy that comes from being denied your only non-surgical abortion alternative, and being forced into an alternative between surgery or carrying your pregnancy to term,” Clapman says.

She was asked if this is simply an issue of cost for the women. “No, because the reality of these womens’ lives is they’re going to be delayed and medication abortion is only available in an extremely narrow window,” Clapman says. “To put this in context, it’s the first seven weeks of pregnancy measure from before pregnancy starts — measured from the last menstrual period. Most women when they discover they are pregnant have a few weeks at most in which they can have a medication abortion.”

Clapman was asked about the safety concerns of the telemed procedure. “Of the 7,000 patients who’ve had this service, there’s no evidence of any safety issues that have resulted. More importantly, this has actually improved public health and patient safety because it’s allowed women to have abortions earlier in their pregnancy when they are safer,” according to Clapman. Clapman says requiring a physician to see a woman before they can get the abortion pills is an undue burden on the women.

“The new telemedicine rules that we’ve directed this court’s attention to do not impose the standard on any other form of health care, even though it is clear that abortion is relatively safe and there are other forms of care that are being provided through telemedicine in Iowa that are equally or more risky,” Clapman explains. 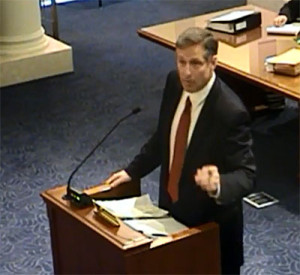 Attorney Jeffery Thompson argued for the Iowa Board of Medicine. Thompson says the board was seeking to ensure the abortion pills are used safely and correctly. “What our board of medicine did was agree with you that there needs to be a standard of care decision, frankly in the face of prior complaint for discipline against somebody that alleged they weren’t following the standard of care,” Thompson says. “And they promulgated a standard of care that focused on safety and tried to resolve these questions, this uncertainty of safety, in favor of the woman.”

Thompson says Planned Parenthood’s own study goes against the claim that limiting telemedicine abortions keeps women from getting the abortions that want them. “They studied two years before they started telemed and two years after, and what it shows is there was no huge unmet need, number one. Patients didn’t drive shorter distances, number two. And in general, it had not real impact,” according to Thompson.

Justice David Wiggins questioned Thompson about the safety findings in the study. “And the study also shows, does it not, that the result of complications –whether by telemedicine or whether not by telemedicine — were exactly the same,” Wiggins asked. “They weren’t worse, but they weren’t better,” Thompson responded.

Thompson summed up his arguments by saying the Board of Medicine set up the rule to ensure the safety of the women who use the drug. “The role of standards of care and legislation is to resolve uncertainty. And that’s what this standard of care does, it’s necessary,” Thompson says. “You may not agree with it, I may not agree with it frankly, but it is within the Board of Medicine to do this, and it is absolutely constitutional.”

Telemedicine abortions are continuing until the Supreme Court rules on the issue. It is not know how long it will take for the ruling.