You are here: Home / Fires/Accidents/Disasters / Cedar Rapids woman thanks rescuers after bizarre accident 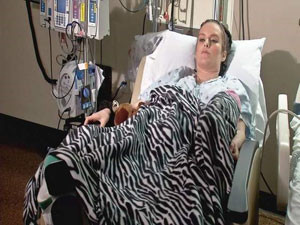 An eastern Iowa woman impaled by a gate pole last week wants all the people who helped save her life to know she’s thankful. Kelsey Cummings spoke with KCRG-TV from her bed at University of Iowa Hospitals in Iowa City.

“I just want to thank them for helping to save my life,” Cummings said. The 27-year-old Cedar Rapids resident was driving a vehicle on the northwest side of the city on March 4 when she crossed the centerline and ran into a galvanized gate.

The crash caused a pipe to go through the car, then through her body. Cummings didn’t realize the pipe had gone through her pelvis until she started trying to get to her cell phone on the passenger side floorboard.

The crash occurred just down the street from where she lives. “I was out there for about an hour before I got help because they didn’t know I was there,” Cummings said. It took Cummings about an hour to reach her phone. She had to push herself into the pole in order to reach the phone, which her husband called several times.

“I had to keep telling myself not to pass out or panic because if I started panicking I was going to lose all my energy and I was going to pass out,” Cummings said. Cedar Rapids Fire Captain Craig Dirks told KCRG that responders left the pole in Cummings throughout the extraction because it wasn’t affecting her airway. An ambulance transported Cummings to the University of Iowa Hospitals and Clinics where surgeons removed the pole from her body.

Cummings is unsure when she’ll be released from the hospital, but she’s expected to make a full recovery.