You are here: Home / Agriculture / Warmer weather has farmers thinking about planting 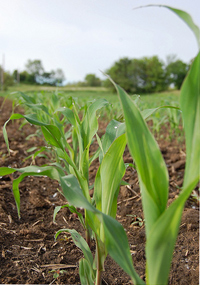 Warmer weather has farmers thinking about scenes like this.

Warmer temperatures have melted away much of the snow cover and that has farmers to starting think about getting into the fields. Iowa State University crops specialist, Joel DeJong says it the temperatures in the 60’s and 70’s have started to warm the soil and clear out the frost.

“I think if you get out there right now you are going to find its kind of — the term we’ll use is greasy — I think we still have some frost in certain areas of those fields and it’s going to be tough to say that it’s all out. We’re making progress, I think that’s what we’re doing right now.”

DeJong covers northwest Iowa and a survey shows soil moisture levels are, for the most part, adequate to begin spring field work. “Most of those sites actually were pretty close to numbers we see for the 15th of April time period. So the amount of moisture we have stored in the soil looks pretty good,” DeJong says. “typically winter time conditions don’t contribute a lot of moisture to the soil profile, so we’re not too shook about that.”

DeJong says the timing of spring rains will impact the start of planting, but he says if things stay warm, it may not be long before the planting season gets going. “You know we could be planting quite a bit of corn in five or six weeks,”DeJong says. He says there’s one thing that will help them know if the fields are ready for planting.