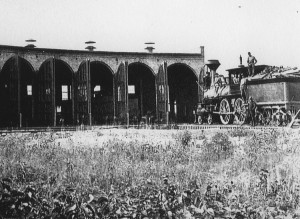 Photo of a train in the Fortepan project.

A first-of-its-kind photo archive is being compiled at the University of Northern Iowa.

“The idea is that people will be able to put together, through this extensive chronology, a very different, complex and appreciative history of Iowa as a diverse state,” Fabos says.

So far, Fabos says the collection includes 2,500 photos. Most of the pictures have come from her students at UNI. “UNI is sort of in a unique position to generate an archive such as this because most of our students come from Iowa,” Fabos says. “So I have classes filled with 24 students and I would say 20 out of 24 have been born and bred in a small Iowa town, typically, all across the state.”

Many of the students, on weekend or holiday breaks back in their hometowns, collect the photos from their parents or grandparents. “They unearth the most amazing pictures,” Fabos says. “It’s stunning to see these pictures that would normally never see the light of day. Sometimes they’re buried deep in boxes or basements and the students, half of the time, never even knew they existed.” The digital photo archive of Iowa’s history will be introduced at 7 p.m. on March 25 at Rod Library on the University of Northern Iowa campus. The photos will then be made available for free public download.

Fabos came up with the idea for the Iowa project after her Fulbright fellowship in Hungary in 2013. While she was there, she helped compile the original FORTEPAN project.

The name FORTEPAN comes from the name of a well-known Hungarian photographic film that was made from 1922 to 2007. Fabos is hoping other states will follow Iowa’s lead and create their own FORTEPAN photo archives.