You are here: Home / News / Perry touts his Texas record: ‘This isn’t theory…This is reality.’ 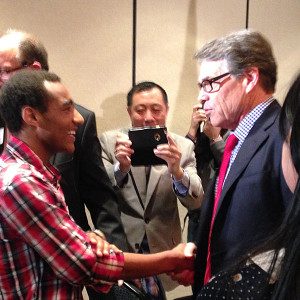 The fifth place finisher in the 2012 Iowa Caucuses is back in Iowa — with some new staff, a healed back and an emphasis on the “reality” of his 14 years as chief executive of the nation’s second largest state.

“I know before you can win the gold medal, you’ve got to be prepared and that’s what this is all about,” Perry told reporters earlier this evening.

Perry is now engaged in what he calls “preparatory work.” That means, he said, frequent stops in Iowa, like his speech tonight to a crowd of Republicans in a West Des Moines hotel. As soon as he shook hands with the man who introduced him, Perry exclaimed:  “I may just jump off of this noisy platform.”

Perry, who underwent back surgery just before entering the 2008 race, quickly stepped down off the stage and strolled from side to side at the front of the room, stopping his speech periodically to recognize key people in the room who had supported his last campaign for the White House.

“Senator, congratulations on getting the session over with,” Perry said, aiming at State Senator David Johnson of Ocheyedan, who yelled back that the Iowa legislature had ended for the week, not the year.

“In Texas, our legislature only meets for 140 days every other year,” Perry said, as some people in the crowd yelled: “Amen!” and others applauded.

Perry continued: “Somebody said, ‘Man, would that be awesome if Washington not only do that.'”

After another quick burst of applause died down, Perry added: “We’d just like for them to meet and get something done.”

Perry talked about some of the things he got done as Texas governor, like enacting tort reform and holding public schools “accountable” by testing students. He also touted his job creation record.

“This isn’t theory,” Perry said, his voice rising to punctuate his point. “There’s data to back this up. This is reality.”

“We’re just a few good decisions and a change in leadership in Washington, D.C. from that happening,” Perry said in hushed tones.

A few minutes later, as Perry spoke with a group of reporters, Perry brushed off a question asking whether he agreed with something a newly hired staff member wrote in an email four years ago.

“I’m the candidate and my views are the ones that matter,” Perry said.

And Perry made it clear Iowans will hear a lot about Perry’s views, from Perry himself.