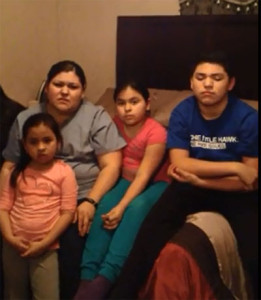 Gloria Villatoro and her children made a video plea to the president to let her husband stay in the U.S.

A pastor in eastern Iowa has been deported, despite the efforts of supporters who hoped to alter the actions of U.S. Immigrations and Customs Enforcement (ICE).

The attorney for Max Villatoro says he’s received confirmation from ICE officials that Villatoro has been deported to Honduras.

Villatoro, the leader of a Mennonite church in Iowa City, was arrested by immigration officials earlier this month because of 1999 convictions for drunk driving and using a fake I.D. to get a driver’s license.

Since 1999, he’s married, fathered four children and become a pastor. Hundreds of people marched in Iowa City this week — while tens-of-thousands across the country signed a petition — hoping to convince immigration officials to set Villatoro free.

Congressman Dave Loebsack, a Democrat from Iowa City, says the case “puts a human face” on the need for congress to figure out how to reform the nation’s broken immigration system.