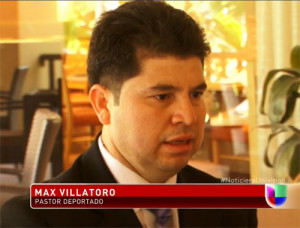 Max Villatoro talks about his deportation from Iowa City on Univision.

The Iowa City pastor who was deported by immigration officials last week spoke to the media after arriving in his native Honduras. Max Villatoro’ story was featured on the Spanish-language network Univision.

The case has drawn national attention as U.S. Customs and Immigration Enforcement arrested Villatoro on March 3 because of 1999 convictions for drunk driving and tampering with records.

Since 1999, Villatoro married his wife, Gloria, fathered four children, and became pastor of a Spanish-speaking Mennonite church in Iowa City. The 41-year-old Villatoro told Univision he doesn’t believe he should be treated like a criminal.

Villatoro said he’s hoping President Obama might help him return to Iowa and be reunited with his family.